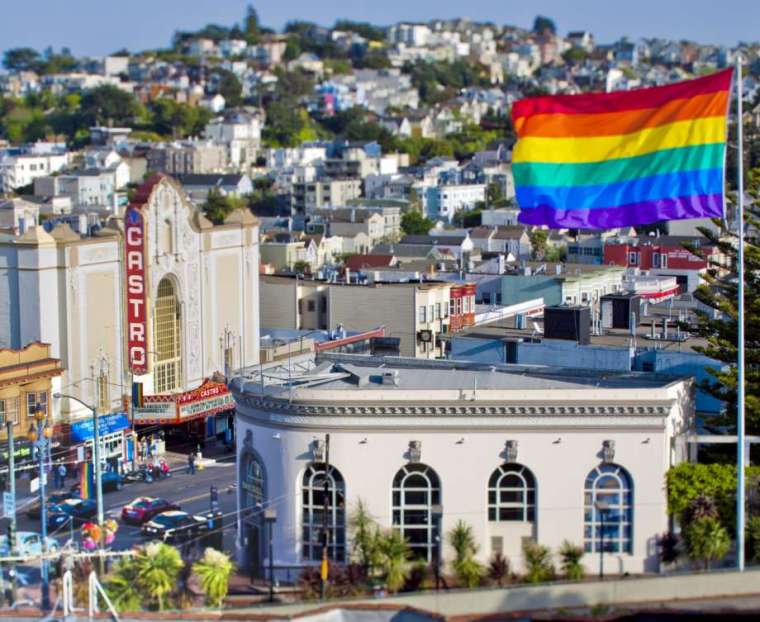 When I was a little girl, we rented out a room in our large Haight-Ashbury flat to generate extra income. It was always rented to a young gay man, probably because my mum, a single parent, felt it was the safest & most sensible option. Their room was right next to mine in the front of the house & included a sitting room that we called the “library” because it had floor to ceiling bookcases, big puffy pillows on the floor & comfy nooks to settle in for reading or taking a nap. It was a common area in the house, but was mainly for our renter’s use, though I could often be found perched on the big overstuffed chair, peering out the window to observe the view of the always entertaining corner of Haight & Ashbury Streets.

If I wasn’t day dreaming, I had my nose buried in a book, such is the life of an only child in a household with no TV. Inevitably, our housemate would slide open the French doors that divided their room to the library & slowly, gently, tenderly, carefully, our friendship would unfold.

The men who lived with us all referred to themselves as my “fairy god-fathers” – their term; not mine. As a child, I didn’t understand the tongue in cheek we’re-taking-our-power-back meaning. Once I did, I both grimaced & grinned.

We had about five young men live with us over the years. This was before gay people could easily adopt kids or were even really allowed to think, dream about becoming parents in some cases. I was the only child in their circle of friends & was often invited to tag along to their ever so glamorous soirées, Oscar parties, holiday fetes & any other over the top event that might just really be a Tuesday night but always seemed like so much more to me. These outings gave my mum nights off from mum-ing & me, adventures to be fondly remembered years later.

I often found myself sitting crossed leg in the middle of one of their friend’s exquisitely decorated antique filled living rooms in the Castro district on a priceless oriental rug, beading necklaces or playing with antique paper dolls (theirs, not mine), Judy blasting in the background, watching a group of lively young men gossip & flirt & dance & share stories about their hopes, dreams & fears.

I heard them talk about how they had escaped to SF from places like Iowa, Kentucky, Texas, so that they could live & love freely. They had all been disowned by their families for being gay. They had to create their own families & I was privileged to play the role of the little sister, niece, cousin they had to leave behind or, on an even deeper level, the child they never believed they would ever be able to have. It was from them that I learned my lifelong mantra: friends are the family we choose for ourselves. And love is love. Sorry Lin, but they said it first.

Of course, I was much too young to really understand the implications of all of this, but what I did know was that I felt so grown up & cherished in their presence. I knew there was something special about these men; to me they were worldly & fancy & sparkly & they knew a little something about everything. And most importantly, they taught me what they knew.

From them, I learned about music & fashion & art & literature & Broadway & why black & white movies of the 40’s were the best movies & that you must always bake with butter, never margarine & that cookie dough is calorie free & the power of the LBD & that one must always dress up when going downtown & the difference between Barbra Streisand & Barbara Stanwick; Bette Davis & Bette Midler; Oscar the Grouch & THE Oscars & the importance of wearing sunglasses, even in the fog, to prevent wrinkles, darling.

They were men of great style, class, elegance, intellect, wit, charm, creativity, beauty & fun. They were incredibly cultured & had exquisite taste. My memories of my time with them run deep:

Going to the “Nutcracker” every Christmas Eve.

Having high tea at Liberty House.

Lip syncing & dancing to the Andrew Sisters “Boogie Woogie Bugle Boy”. I know all the words, still, to this day.

Taking in the Christmas decorations downtown at Macy’s & I.Magnin’s  & ending the day with a cable car ride to Ghirardelli Square for hot chocolate with extra cherries & whipped cream, a tradition I still practice every holiday season.

To a young child, these experiences leave a mark; a permanent mark of rainbow colored glitter sprinkled on her soul.

To my child’s eye, mind & heart, these men were magical. They were my playmates; the most delightful big brothers to a shy, often sad & lonely little girl. They were fun & silly & played dress up & Always let me be Cher to their Sonny. A major sacrifice on their part, to be sure!

They told me I was a glittering gem & that I was “fabulous” & they meant it in a REAL way, not a “hey girl hey” way, tho we had those moments too. They treated me with respect. They didn’t patronize or pander to me. They expected me to keep up my end of the conversation, regardless of the topic or my lack of knowledge about it. Local politics or Best Dressed at the Oscars; my opinion mattered to them. They didn’t baby me. They treated me like an equal. But that didn’t mean that they didn’t spoil & coddle me. They made me feel special & valued & respected. Perhaps because society didn’t offer them the same respect as gay men, they felt compelled to make sure I was always treated as a whole person. For a young girl of color, this went far in developing my sense of self & worth & pride in being who I was.

They also showered me with gifts, some that I still have to this day:

A beautiful hand-woven throw that made on an old-fashioned loom.

A hand beaded necklace with an antique tiny bell at its center. Too tiny now for my adult neck but still cherished.

A beautiful white cake stand from Tiffany’s; an odd gift for a 10-year-old girl, you might think, but as the gift giver said when he handed me the HUGE blue box, “Sweetie, if I’ve taught you nothing else, please remember this: the light blue box is always the BEST box!”

I still have those treasures, but I no longer have my fairy god-fathers.

They all eventually succumbed to HIV/AIDS. They were all in long-term relationships. Their partners died too. By the early 90’s they were all gone.

These men were the first & most prominent adult male figures in my young life; in truth, the only father figures I had growing up. I know for a fact that it is because of my time with them that I am the person, the woman, the friend, the activist, I am today.

They didn’t live to see the many strides & advances that the LGBTQ community has made. If they were still alive today, they would be at the front of the line continuing to fight the good fight for the strides still to be made.

But they aren’t, so I do it for them. It is the least I can do to honor their legacy & repay them for all they have given me.

My description of these men might seem almost disrespectful in its seemingly stereotypical depiction of gay men, but these were the men I knew, as I knew them, when I knew them. This was who they were, at a time when the gay community in SF was thriving & carefree; when the pulse of the disco beat of the day seemed to ring in sync with the beat of the cultural awakening that was taking the world by gloriously gay rainbow storm on the streets of SF.

I am so lucky that I spent my formative years as their fairy goddaughter, wrapped up in the glow of this historical time. But my golden carriage turned into a pumpkin well before midnight of my young adulthood dawned and my fairy god-fathers vanished with it.

I am a better human being because I knew them. THIS, I know for sure. My fairy god-fathers may be gone, but their rainbow colored fairy dust flows in my veins forever. They had their Pride. And they gave me mine, too. xo Lulu